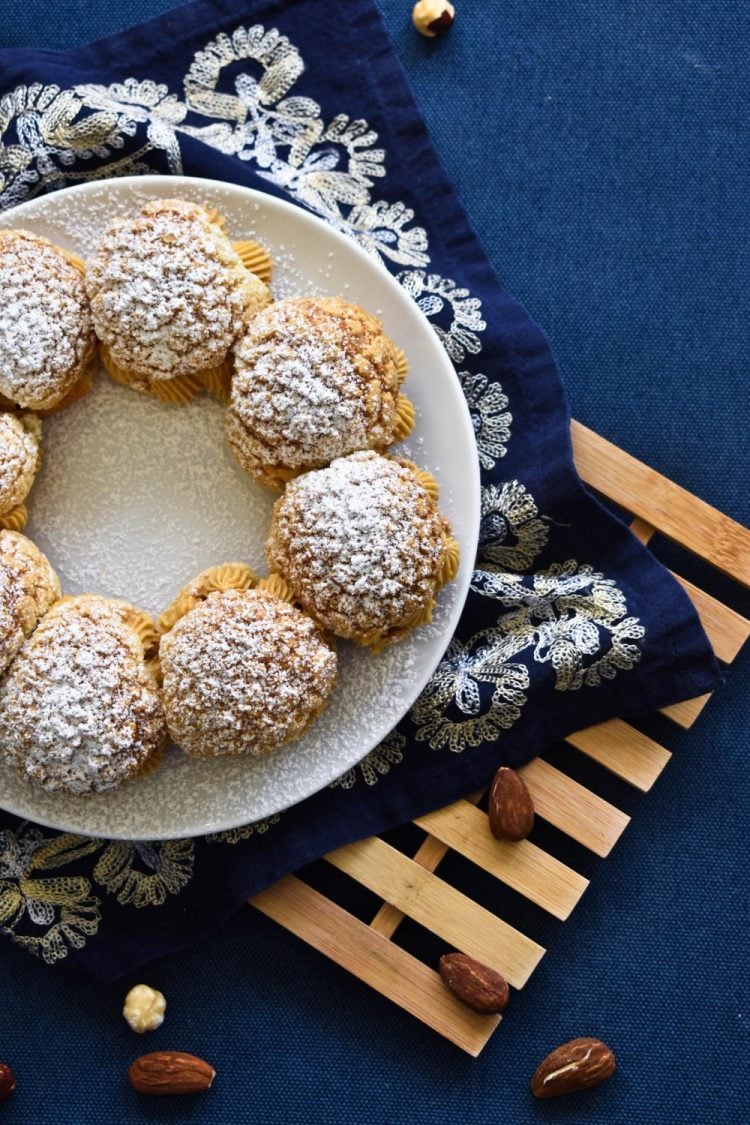 Have you ever heard people mentioning the fantastic Paris-Brest they had eaten but had absolutely no idea what it tasted like. Not even where to buy it? Depending on where you live, finding a Paris-Brest in a bakery can be a bit tricky. If you fit into this category then I’m here to tell you: no more missing out! We will make it from scratch so you can see for yourself what an amazing dessert it is!

What Is A Paris-Brest?

A Paris-Brest is a French dessert composed of choux pastry that is traditionally sprinkled with sliced almonds before baking. It is then cut in the middle and filled with a cream. The choice of filling is really a matter of personal taste. French buttercream (crème au beurre) can sometimes be used although it seems most pastry chefs nowadays are leaning towards the lighter mousseline cream, flavored with almond and hazelnut praline paste (praliné).

The shape of the Choux for the Paris-Brest

A characteristic trait of the Paris-Brest is its circular shape. The Paris-Brest was originally created to commemorate the bicycle race that ran from Paris to Brest. Traditionally, the choux pastry is piped in a circular fashion to mimic the bicycle wheels. Philippe Conticini retained the circular aspect but brought new life to it by piping several choux next to each other in a flower shape.

Piping the choux for a Paris-Brest

We already discussed how to pipe choux when learning how to make choux pastry. But let’s talk about the placement of the choux.

This Paris Brest is composed of 8 choux: 4 along 2 perpendicular lines and 4 in the gaps. If you aren’t great at eyeballing it, it is best to draw a template on the back of the parchment paper before piping.

Since I’m terrible at piping, I prefer using my dome-shaped silicone molds. You can fill them with choux pastry, and freeze them for later use. Once you need them, simply unmold the choux and thaw them at room temperature for 15-30 minutes, depending on how warm your kitchen is. This also makes it much easier to place the choux correctly as you can just move them around for a few seconds (before they start to soften) until you are happy with the flower you made!

How close should the choux be?

How close you want the choux to be is up to you really. But let me tell you a few differences.

If they aren’t completely stuck to each other, they will probably not stay connected when you try to cut them. Is this a bad thing? I personally don’t think so. It gives you the freedom to rearrange your flower shape when it is on the serving platter and if you don’t like one of the choux, you can just replace it, assuming you made spare ones! It will also be easier to eat them as you don’t need to cut anything when you want to dig in!

If they are stuck to each other, the choux won’t have a fully round shape but will be a bit more elongated.

We already discussed how to make the first three items in previous posts. Let’s talk about the cream today. But before we get to that, just a quick note on the craquelin.

Just before putting them in the oven, you will have to place your craquelin on top of each choux and press it very slightly so it sticks.

Regarding the size of the craquelin, it should be slightly smaller than the choux you piped. I wanted to make mine slightly bigger so the choux would be almost completely covered with craquelin but realized only too late that they wouldn’t comfortably fit. I ended up with some overlapping craquelin tops! Not a serious issue since they will soften during baking but worth a mention!

How To Make Praliné Cream

I kept going back and forth wondering if I should present the recipe with these proportions or not. Let me give you some context. The first time I made these, my choux came out of the oven looking huge and completely hollow in the center.

The amount of cream specified in the recipe was just enough. I had to squeeze everything out of the piping bag until the last drop. The second time I made them, my choux came out smaller and there was some leftover cream.

So depending on how big your choux are or how much they rise in the oven, you’ll have to make sure there is enough cream for all the choux when you are piping.

Normally I’m uneasy with these tight measurements and would recommend making more. But then I thought, since we are learning, it might be better to start with smaller amounts (less wastage) and then scale up once we know better what we are doing. What do you think? If you don’t agree, you can easily double the recipe.

Make sure your eggs are at room temperature so they mix properly with the other ingredients. It is easier to separate them while they are still cold and then cover them with cling film and bring them to room temperature.

In the first part of the recipe, you are essentially making a pastry cream. If you made the strawberry tart from the tart calendar, then you already know how to make pastry cream. Let’s quickly go through the steps again.

Don’t crank up the heat or you’ll suddenly end up with a thick, rubbery and lumpy cream. Another thing you should take into account is the size of your pot. The less your mixture fills the pot, the faster it will heat up and you will be caught off guard. So don’t use a large pot for a small portion for example.

From pastry cream to praliné cream

Okay, if you are anything like me you might be thinking right now, that’s all there is of the cream?! How will I fill 8 choux with it?! Well, it’s not done yet. It will go through the magic of whipping!

Take your cream out of the fridge. It will look quite dense. In the bowl of your stand-mixer fitted with the whisk attachment, start whipping on medium speed for 3 minutes. It should look creamy and smooth.

Hopefully, you won’t have any issues making this cream. But if you do, you can find some troubleshooting tips in the pastry cream post.

The Paris-Brest is made up of 3 parts: The choux pastry with craquelin, the praliné cream and the praliné insert.

Below are 2 piping ideas. I’m pretty sure you can do better than me but this is just to get you going. You can also pipe one large dollop of cream which is what I normally do but my choux were too small this time and the praliné took up most of the space!

You have a few options for the praliné insert:

The easiest thing to do is to fill dome-shaped silicone molds (the same size as those used for the choux pastry, which gets bigger in the oven) with praliné and freeze them. They are very easy to unmold and you just place the frozen praliné dome in your choux, no mess. Each dome of praliné from a 3.8cm silicone mold weighed about 16 g.

If you don’t have silicone molds, you can simply use ice cube trays. It is slightly harder to remove the praliné. I used a knife and gently pushed the praliné out.

And my least preferred option is piping.

You can insert the piping bag directly into the cream and start piping until the cream “swells”. But if your praliné is too runny like mine was (mixed for too long), it might drip everywhere. It is also hard to tell how much you have put in each choux.

Once you’ve assembled the Paris-Brest, refrigerate it for at least 45 minutes before serving it. This is especially important if you are using the frozen insert. You want to make sure it has fully defrosted before attempting to eat the Paris-Brest!

And you’re done! Well, almost! Just sift some icing sugar on top of the choux before serving and they are ready to be eaten!

Choux pastry topped with craquelin, filled with almond and hazelnut praline cream and a liquid center. Sift some icing sugar on top and you have one of the most amazing choux pastry desserts!

We use cookies on our website to give you the most relevant experience by remembering your preferences and repeat visits. By clicking “Accept”, you consent to the use of ALL the cookies.
Cookie settingsACCEPT
Manage consent

This website uses cookies to improve your experience while you navigate through the website. Out of these, the cookies that are categorized as necessary are stored on your browser as they are essential for the working of basic functionalities of the website. We also use third-party cookies that help us analyze and understand how you use this website. These cookies will be stored in your browser only with your consent. You also have the option to opt-out of these cookies. But opting out of some of these cookies may affect your browsing experience.
Necessary Always Enabled
Necessary cookies are absolutely essential for the website to function properly. This category only includes cookies that ensures basic functionalities and security features of the website. These cookies do not store any personal information.
Non-necessary
Any cookies that may not be particularly necessary for the website to function and is used specifically to collect user personal data via analytics, ads, other embedded contents are termed as non-necessary cookies. It is mandatory to procure user consent prior to running these cookies on your website.
SAVE & ACCEPT